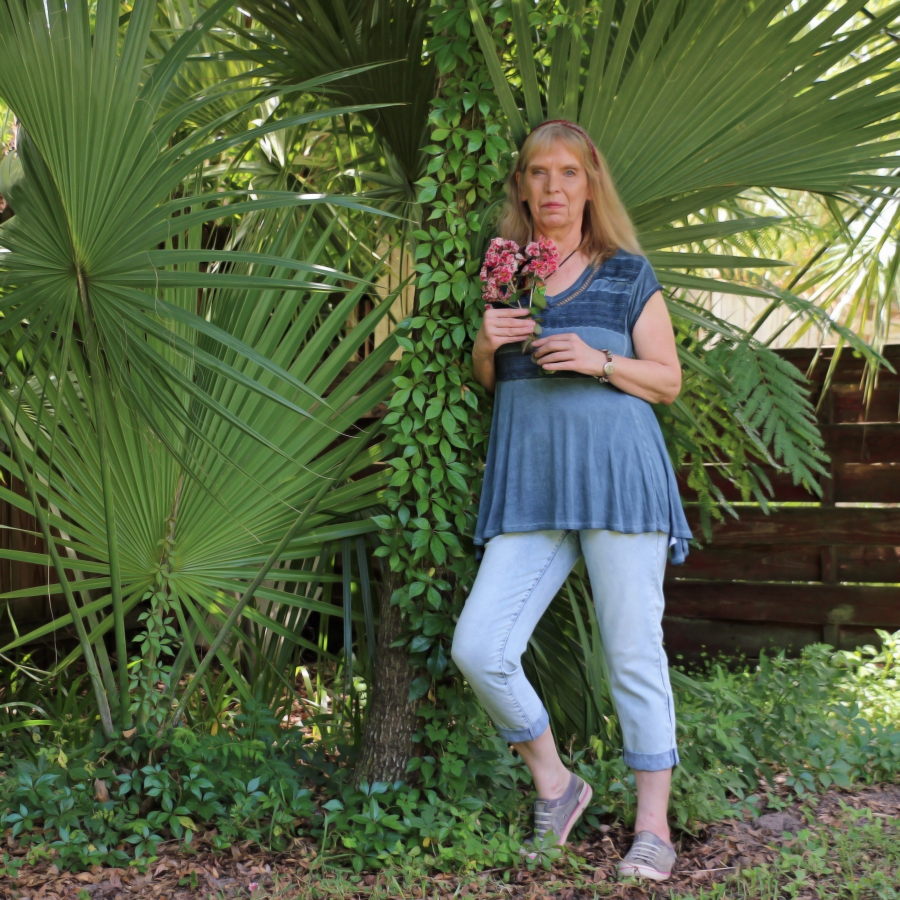 My original concept for this self-portrait was more of a hippy-dippy-let-your-inner-child-free-to-romp thing. Then this last week happened. More young black men gunned down by police for no apparent reason, police officers falling victim to sniper fire in Dallas, the ongoing BLM protests amid hyperbolic and untrue rhetoric about their “violent” motives, the over-aggressive police reaction to protesters across the country. And I haven’t even touched on other news. With all this going on, I wasn’t even sure if I had a voice anymore or, if I did, what I wanted to say. Then last night I was thinking about an article I’d read that compared what is happening in our country today to what was happening in 1968. I decided to go ahead and do this self-portrait with less of a staged costume effect and with a different focus in the narrative.

I was 14 in 1968 and graduated high school in 1972. I came of age in a time when the Vietnam war was still going on, when women’s liberation was in bloom and women were burning their bras, when the Civil Rights movement was strong and vocal, when boys were afraid of being drafted and when many of the young men I later went to college with were already military veterans. I remember the race riots of 1968 and the violence at the Democratic National Convention that same year. I remember the Kent State shootings in 1970. I remember protest music and youthful passion for a better world. I remember Rachel Carson’s “Silent Spring”. For those in my generation, these are not things we learned in a history book but things we lived through. It was a time of great anger but also a time of great hope.

I look around me today and I see many of the same battles still being fought. Systemic racism and white privilege are still holding people down. Women are still fighting for an equal place in society. The LGBTQ community is more out of the closet and in the open but we still have more battles to fight before we achieve parity. We are still fighting drawn out, seemingly pointless wars that do more harm to innocent people than anything else. And damnation, we’re still fighting to keep control of basic resources like food and water which should be available to everyone without question. Too many people are still hungry. Too many still homeless. Too many still living in poverty. The planet is falling apart.

So what happened? What happened to those major social changes we were determined to make back in the late ’60s and early ’70s? I don’t have any certain answers but it occurred to me last night that perhaps part of the answer lies in a name: flower children. Perhaps by allowing ourselves to be characterized as children, on some level we bought into the notion that idealism and dreams of peace and harmony are childish things. I’m not at all a bible reader but even I know this passage from Corinthians: When I was a child, I spoke as a child, I understood as a child, I thought as a child; but when I became a man, I put away childish things. Did my generation put aside those so-called childish goals and instead focus on what we came to perceive as the grown-up stuff, pragmatism in the face of injustice and acquisition in place of community? I think that many of us did. And in doing so, we’ve allowed problems that should have been solved long ago to persist, indeed to fester.

I don’t have any answers for what is happening now either except to know that things must change, change substantially, if we are to go forward and thrive as a global community of humans. So I’ll leave you with one of my favorite music videos from Playing for Change:  “Love is All”. Perhaps it’s time to start listening to the children, the children around us and the children within us. Perhaps it is time once again to become idealists who believe in peace and harmony after all.